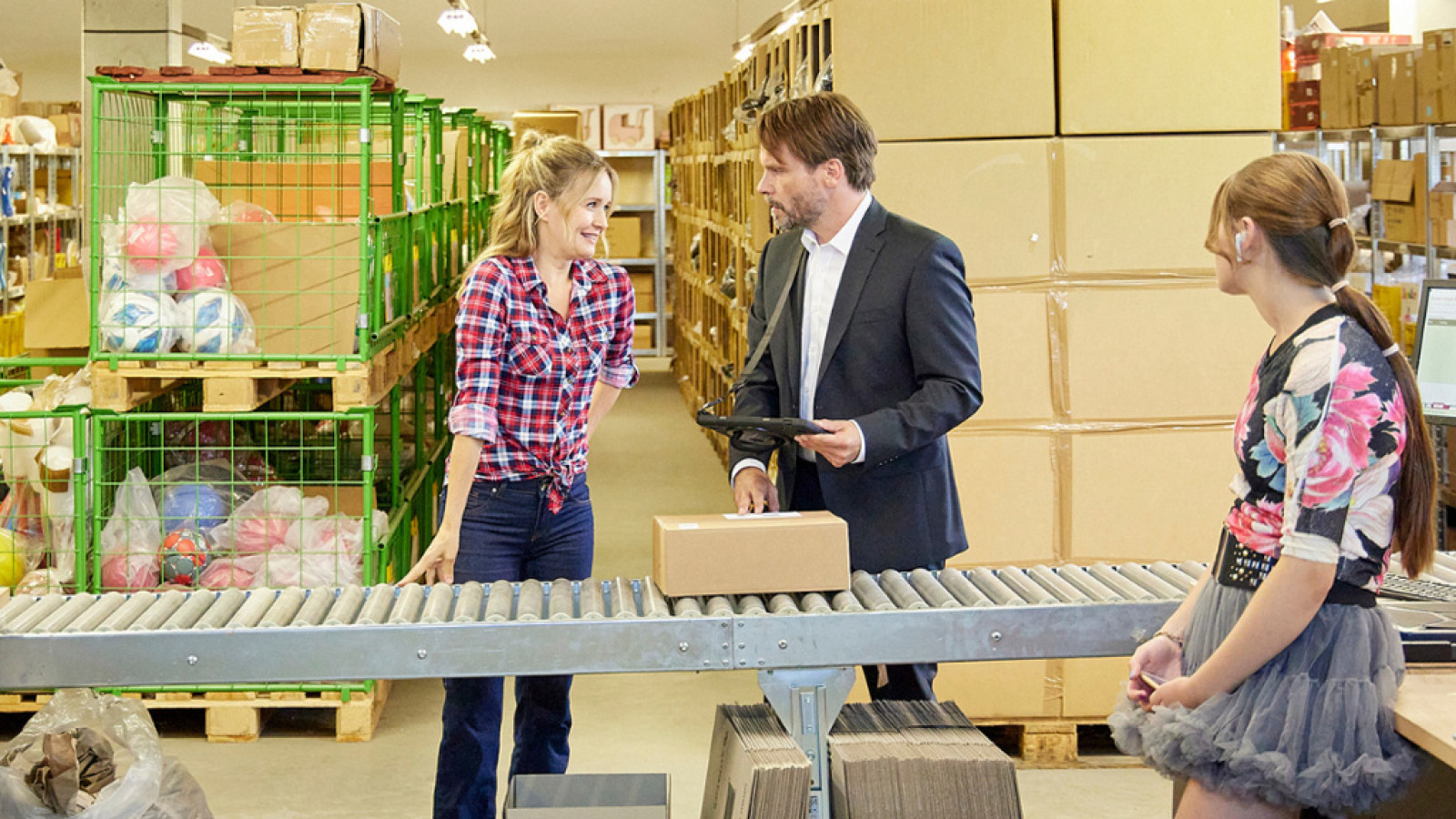 Festivals, awards, cinema premieres, and screening dates: Kinescope Film, based in Bremen with additional offices in Hamburg and Cologne, looks back on a successful year of production in 2022 and is looking with great optimism to the future.
Press release

Kinescope Film starts the Christmas season with the NDR series Retoure: Stephanie Stappenbeck and Wanja Mues are starring in the three-part mini-series directed by Torsten Wacker, which will be broadcasted on NDR television on December 21st at 10 pm and repeated on January 7th, 14th and 21st at 5.30 pm each day. Based on the idea of Katharina Walther and Florian Mengel, the three episodes will be available in the ARD-Mediathek from December 5th. A turbo capitalist from the West plans to turn a sleepy returns center in Mecklenburg-Vorpommern into a global player. He has not expected the demanding boss and her brigade, who up to now have been solidaristic about keeping the profits from sold returns in their own pockets.

"According to a study by Bamberg University, Germany is the 'European champion' in returned products, and we and the NDR were very enthusiastic about scrutinizing this business and its possible excesses in a comedic way," says Matthias Greving, Managing Director of Kinescope.

Frauke Lodder's feature film debut, At the End of Summer, starring Bettina Zimmermann, Mark Waschke, Michelangelo Fortuzzi, and Flora Li Thiemann, has just done filming. The Kassel-based director was awarded the Hessian Film Award in 2019 for the screenplay. The film tells the story of the brother and sister Hanna and Timo, who grow up in a strictly conservative family. When Timo discovers that he is homosexual and Hanna's interests also become incompatible with their parents' values, they come into conflict with themselves and the environment. Johannes Louis also stars Karoline Eichhorn, Seumas Sargent, Luna Schaller, Thimo Meitner, and Pet Benkhofer. After initial projects, the production of her multiple award-winning documentaries Inseparable and the co-production of Sober Together, Kinescope Film continues its long-standing collaboration with Frauke Lodders with At the end of Summer. Fabian Schmalenbach's long-term documentary Sober Together, about four addicted people on their way to a drug-free life, was recently screened at the 39th Kassel Documentary Film and Video Festival and celebrated its festival premiere at the Lichter Festival in Frankfurt.

Among others, the high-end documentary film for Sky, The Relotius Affair (working title) by Daniel Sager (Behind the Headlines) about the rise and fall of the former star reporter and the documentary Cosmos Ligeti by Herbert Eisenschenk about the Austro-Hungarian composer Györgyi Ligeti, who shaped the music of the 20th century like no other with his sound-intensive choral and orchestral works influenced by other sciences and cultures. The composer also became known through Stanley Kubrick, who used Ligeti's compositions in the films 2001: A Space Odyssey, The Shining, and Eyes Wide Shut. In addition to many companions, Kubrick's producer and brother-in-law Jan Harlan also has his say in the film.

Kinescope Film is also responsible for the recording of the world premiere of John Neumeier's "Donna nobis pacem," inspired by Johann Sebastian Bach's Mass in B Minor, with which the choreographer bids farewell after 50 years in Hamburg, as well as the associated documentary John Neumeier - A Life for Dance by the multi-award-winning director Andreas Morell.

Kinescope Film started 2022 with the Berlinale participation of Constantin Hatz's debut film Forces, which will be released on February 9th, 2023. Cinematographer Rafael Starman was awarded the Heiner Carow Prize of the DEFA Foundation for his efforts. Marie Noëlle's feature film Heinrich Vogeler - Life of a Dreamer celebrated its cinema premiere in mid-May, has been available on iTunes and Amazon since November 17th, is available on DVD, and will be broadcast on Arte on December 11th. The debut film Elaha by Milena Aboyan, in co-production with Essence Film, Filmakademie Baden-Württemberg, SWR, and Arte and funded by MFG Filmförderung Baden-Württemberg and nordmedia, was selected as one of six projects in post-production for the First Look section of this year's Locarno International Film Festival and awarded the Kaiju Cinema Diffusion Prize. Another project by Milena Aboyan and Constantin Hatz is currently in financing: Before the Beginning, a co-production with ZDF - Das kleine Fernsehspiel, is expected to be shot in autumn 2023.